Thank you for your email. Good questions!

May take me a week or two to answer, but Ive begun to think about them.

“Without sounding too bitter... I would just like to say that when my agent contacted The new Equalizer movie casting people and inquired if there was anything in it for me, they told him that they were trying to "...distance themselves as much as possible from the original".

“While I wish them well, including Michael Sloan who I believe is involved in the production in some way, I guess it puzzles me as to why they wouldn't use people like me, Mark Margolis, Billy Zabka, Anthony Zerbe(who I think is still with us) or Irving Metzman in some capacity, even in a cameo somewhere. It just seems that would appease the old fans, while still bringing in the new Equalizer, hopefully with reference somewhere to Edward and Lansing. It looks like it has the aura of Bad Kharma around it, I must say. I hope it's a hit and they do a sequel, and THEN put us back in it, maybe with me as a case officer at the Agency or something similar. But I won't hold my breath...."


Thank you for your email. Good questions!

May take me a week or two to answer, but Ive begun to think about them. 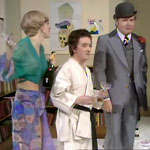